Members of the United Church Women (UCW) are gathering from July 11th to 15th in Membertou, Nova Scotia to celebrate their sixtieth anniversary.  The UCW was formed in 1962 when the Woman’s Missionary Society and the Woman’s Association were amalgamated.

The theme is “Continuing in Hope” based on Hebrews 6: 19 – “This hope is like a firm and steady anchor for our souls.  In fact, hope reaches behind the curtain and into the most holy place.”  The plenary speaker is Sally Armstrong, human rights activist, journalist, and award-winning author.  The participants will eat together, pray together, learn together, and play together. 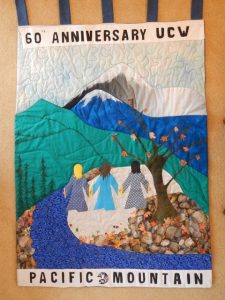 UCW members in each of the fifteen Regional Councils created a banner depicting their region and the theme.  The Pacific Mountain United Church Women Banner was created by Chub Gosse, June Pratt and Beth Henderson of Peninsula United, Surrey, BC.  The Tree of Life represents Hope.  The mountains, trees and sea evoke images of the Pacific Mountain Region.  Bits of real beach glass and tiny starfish along the bottom add a touch of the real world to their creation.  The three women holding hands represent United Church Women who have worshiped and worked together to support the United Church of Canada for 60 years.  The banner was dedicated at the Peninsula UCW Service on Sunday, June 12. 2022.  Eleven women traveling to the conference will be proud to take the banner to the 60th Anniversary celebration to have it displayed. ~ adapted from a post on the Pacific Mountain Regional Council website written by Winnie Kowalewich. 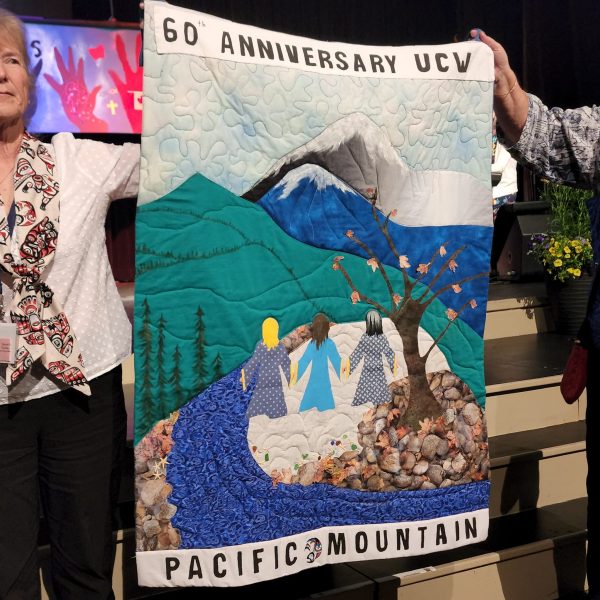 The PMRC UCW banner being presented at the UCW 60th Anniversary. Photo found on The United Church of Canada’s Facebook page (https://www.facebook.com/UnitedChurchCda).

Celebrations of the United Church Women anniversaries started with the 25th Anniversary in 1987; the 35th Anniversary was celebrated 10 years later in 1997.  It was decided to celebrate every 5 years from then on.  To celebrate the occasion in 2012, a 50th anniversary project was adopted.  It was to support the Morogoro Women’s Training Centre in Tanzania.  Over $268,000 was raised to support the training school, and as a result over 600 women were trained in maternity health care.  In 2017, the United Church Women celebrated its 55th Anniversary, “Celebrating Spirit”, in Vancouver, British Columbia. 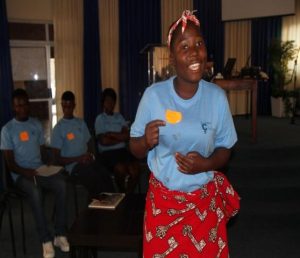 The current anniversary project, Women for Change, Zambia, will end in 2022, and a new initiative will be chosen for the next 5 years.  Access to education for everyone, regardless of income, is an essential part of securing greater justice, broad-based participation in society, and the eradication of poverty.  Many children, particularly girls, face significant barriers to education.  Women for Change, a Mission & Service partner in Zambia, is working to keep girls in Zambia in school.  More information about this project and how one can support it can be found here.

~ This information and more about the UCW
can be found on this page on The United Church of Canada website and
this page on the Pacific Mountain Regional Council website.

A message posted from Moderator Richard Bott on his Facebook page on July 12th:

The UCW (United Church Women) has been a vital group in every congregation with whom I’ve served, and as I was growing up.

I remember not only their amazing service to the congregation and the wider community, but also the depth of their biblical and scriptural exploration, and their support of women’s discipleship and leadership in the life of The United Church of Canada (and, in fact, growing Jesus’ disciples throughout the whole congregation, through their love, guidance, strength – and seemingly neverending meals that fed the body and soul!)

Today, as the national UCW gathers to celebrate 60 years of life and community and ministry, I celebrate all that they have been, are, and will be.