With our minister of six and a half years, the Rev. Brian Krushel, accepting a call to Faith Lutheran in Kelowna, our Parish has been in transition since the end of August 2019. A committee was formed to do the necessary work for seeking our next minister in consultation with all three judicatories. Bishop Barbara Andrews from the Territory of the People took the lead among the judicatories, as we would be following the Anglican process.

There is good news to report! The Personnel Commission / Call Committee / Profile and Search Team, which usually was just referred to as the Parish Search Committee, has completed its work. After receiving affirmation from Bishop Greg Mohr of the BC Synod of the Evangelical Lutheran Church in Canada and the Rev. Victoria Andrews of the Pacific Mountain Regional Council of the United Church of Canada, the Bishop appointed the Rev. Bruce Chalmers to serve as the Priest/Minister/Pastor of the North Thompson Ecumenical Shared Ministry in mid-March. He will begin his work with us on June 15, 2020.

For many years the Pastoral Charge was made up of 3 points: Blue River, Clearwater, and Barriere.  The Charge begins in McLure and goes to Blue River (a distance of almost 200 km).  In the 1980s Blue River United Church closed and thus the charge became 2-point.

In the late 1990s, Clearwater United Church sold their building and have been worshipping in St. James’ Catholic Church since 2000.

As of March 17, 2020, services at both Trinity Shared Ministry and the Church of St Paul have been cancelled to assist in avoiding the spread of the COVID-19 virus.
Normally, worship is held each Sunday.  All are welcome. 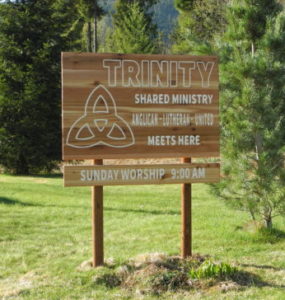 A new sign was raised in time for Easter Sunday, 2016.

So, if you’re looking for a church family, or some way to re-imagine your experience of church – come out and check us out!  Our doors are always open for you!