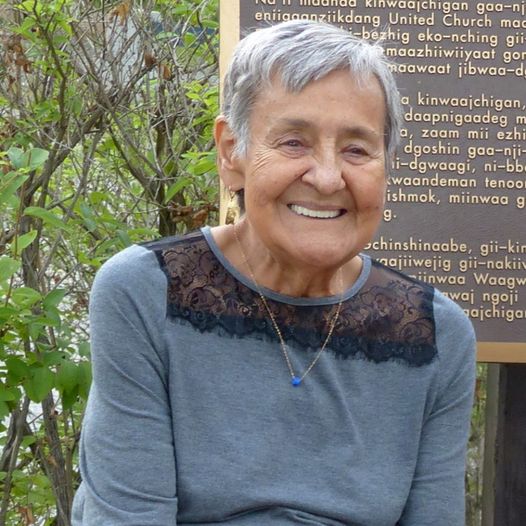 Alberta Billy on the 30th anniversary of the Apology, in Sudbury, Ontario, in 2016.
Credit: Kelly Buehler

Alberta Billy, the We Wai Kai Elder who in 1985 demanded that The United Church of Canada apologize for its role in colonization and the loss of Indigenous languages, culture, and spirituality, passed away on June 13, 2022.  The Moderator and the General Secretary offer their deep condolences to Alberta’s husband Dan, their family, and their community.

Alberta’s actions and words on behalf of the Native Ministries Council at the November 1985 meeting of the General Council Executive both shocked and reverberated with those present, and ultimately led to the church’s first Apology to Indigenous Peoples at the 31st General Council in August 1986.  In 2016, Alberta, accompanied by one of her grandchildren, was present to mark the 30th anniversary of the Apology in Sudbury.

These actions began a process of deep change in the United Church. Moderator Richard Bott notes that “the whole of the church is deeply indebted to Alberta Billy for what she demanded of us and called us to do.  We could not be the church we strive to be without her.”

Alberta, a long-time advocate of reconciliation, reminded those present at the 30th Anniversary that the Apology is not complete.  It has been acknowledged but not accepted by the Indigenous Church, which continues to look to the United Church to concretely demonstrate its commitment to a nation-to-nation relationship rooted in mutuality and respect.

As the church seeks to truly honour the Indigenous Caretakers’ Calls to the Church, it would do well to remember Alberta’s faith and commitment to the Indigenous ways in which she was raised and lived, as well as to the church which she believed could always do better.

An interview featuring Alberta Billy at the 30th Anniversary of the Apology can be viewed on the United Church YouTube channel.

Also, Elder Alberta Billy was a guest at the Pacific Mountain Regional Council’s September 29, 2021 Town Hall Meeting.  This post gives information about the conversation with her and the link to the recording of the meeting.