The ashes of Ash Wednesday are a reminder
of all the life you are called to live. 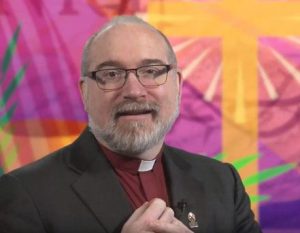 The Right Rev. Richard Bott shares his Lenten message, saying that Ash Wednesday isn’t only about lament and death—it’s also about celebrating life because the two are so deeply intertwined.  For the 40 days of Lent, you are invited to join in celebrating life each day.

Hello! The grace of Jesus Christ be with you. My name is Richard Bott. I’m the Moderator of The United Church of Canada.

The season of Lent begins with an important day: Ash Wednesday.

Traditionally, during worship that day, there is a ritual in which a cross is made on the forehead or the hand out of ash. In the church we call it “the imposition of ashes.” When the minister makes the mark of the cross in ash, they often say, “From dust you come, to dust you will return.” It’s a moment in which we remember that everything comes to an end.

The ash, the cross—these are memento mori, things that we carry to remind us of the reality of death. Not just death in general, but our own individual deaths.

Strangely, it’s not. It’s almost like everything gets turned upside down. This moment isn’t only about lament and death; it’s about celebrating life because the two are so deeply intertwined.

In a world that seems to be driven by fear, in a world where hopelessness seems to be taking over, in a world of climate crisis, in a world where leaders seem to be building tensions between people rather than working for peace, those of us who are disciples of Jesus, we need to be people who live hope: hope in God, hope in our neighbours, hope for the world.

For the 40 days of Lent, I would like to ask you to join with me in celebrating life each day.

I would like to ask you to help me to turn the world upside down.

I would like to ask you to join with other disciples of Jesus in believing in the abundant life that he said he was bringing to all creation, and to be people who live hope in that life everywhere we go.

Feel the ash on your forehead or on your hand and remember not only your death, but remember, too, all of the life that you are called to live!

In life. In death. In life-beyond-death, God is with all creation.