To Be Installed on Friday, July 27th 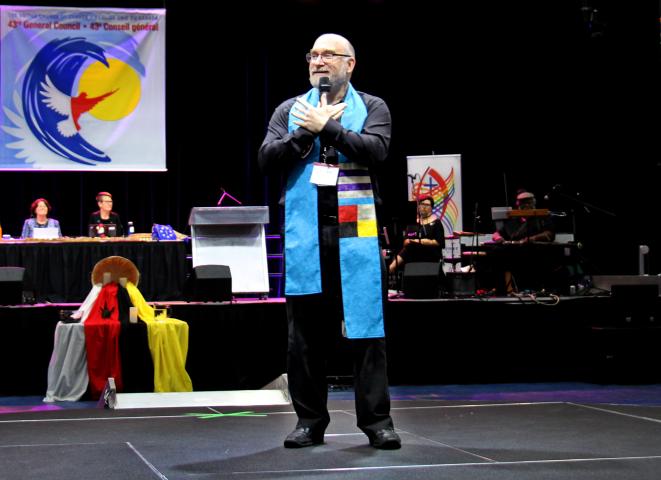 ~ The following was posted on the United Church of Canada website on July 26, 2018.

The United Church of Canada has elected the Rev. Richard Bott, 49, from Vancouver as its 43rd Moderator from a field of 10 nominees. Meeting in Oshawa, Ontario, over 300 commissioners (delegates) from across the country have gathered this week to decide on a wide range of church business that includes the election of the Moderator, who will be the church’s spiritual leader for the next three years.

The Rev. Bott recently served as the minister for Pacific Spirit United Church in Vancouver and was in the process of moving to a new congregation. But that changes now that he has been elected Moderator, which is a full-time position in the church.

Born in Marathon, ON, the Rev. Bott has served churches in Ontario and British Columbia. He is well known for his skills as a leader, writer, and educator. An early adopter of social media, he manages a Facebook group of over 700 United Church ministers.

Looking ahead to the next three years, the Rev. Bott says, “I am excited about the possibilities that are in front of the church and hopeful that we are going to live into them together.”

Unlike leaders in other denominations, the Moderator does not set policy or doctrine. Those decisions are arrived at by committees of clergy and lay people in the church who bring them to one of the triennial General Council meetings, where they are voted on by people chosen from all regions of Canada and from Bermuda. The Moderator-elect will be installed as the new Moderator on Friday, July 27, at the closing worship service of the meeting.

Following his election, the Rev. Dr. Richard Bott answered questions about his vision as he becomes the next Moderator of the United Church.  See http://ow.ly/Qg6N30l9bEu.