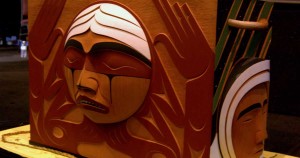 During the Truth and Reconciliation’s National Event in Vancouver, there were times set aside each day for individuals, organizations (including a variety of religious groups), and representatives of the parties to the Indian Residential Schools Settlement Agreement to make statements, presentations, and/or apologies.  Most placed some symbol (a written work, illustration, or object) into the Bentwood Box that is travelling to all the National Events and will eventually be housed in the National Research Centre at the University of Manitoba.

The United Church of Canada’s Moderator, Rev. Gary Paterson, captured the sense of these presentations in his blog titled “TRC Vancouver:  Expressions of Reconciliation“.  The following are links to some of the presentations that were made:

BC Conference of the United Church of Canada
Anglican Church of Canada
Roman Catholic Archdiocese of Vancouver
Kairos Canada:  BC/Yukon
University of British Columbia
Chief Bev Sellars presented her memoir, They Called Me Number One, published by Talonbooks
Resolution Managers of the Government of Canada
The Centre for Israel and Jewish Affairs
Union of BC Municipalities