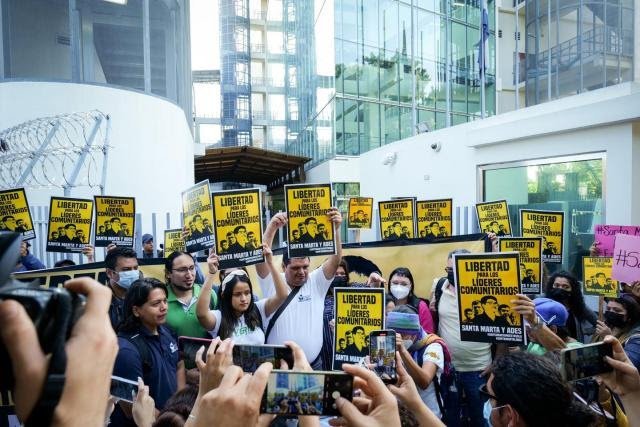 ~ This article was posted to The United Church of Canada’s website on January 23, 2023.

In the early morning hours of January 11, five people, including staff of the Association for Economic and Social Development (ADES) and leaders of the community of Santa Marta El Salvador, were arrested by the country’s Attorney General’s Office and National Civil Police. Those arrested were the Executive Director Teodoro Antonio Pacheco and Legal Advisor Saúl Agustín Rivas Ortega of ADES and community leaders in Santa Marta: Miguel Ángel Gámez, Alejandro Laínez García, and Pedro Antonio Rivas Laínez.

ADES is a global partner of The United Church of Canada. Our concern is based on knowledge and deep respect for the work of ADES and historical accompaniment of the community of Santa Marta that dates back to its exile in Honduras. Since its return, members have built a community based on the common good and care for the environment. Women, small-scale farmers, youth, and the most vulnerable from Santa Marta and the surrounding communities have benefited from ADES work in the areas of human rights, sustainable agriculture, water resources management, education, health, community organization, and participation over its 30-year history. Read the blog post “Fake criminal charges, mining justice and solidarity in El Salvador” for more information about the relationship between The United Church of Canada and ADES.

The United Church of Canada joins with 250 organizations from 29 countries to call on the Salvadoran government to drop the charges against leading Water Defenders arrested on January 11 and advocate for their release. The human rights and environment defenders were among leaders of the historic and successful campaign that convinced the Salvadoran legislature to unanimously pass a ban on metals mining in 2017 to save that nation’s rivers. The government is reportedly considering overturning the mining ban and allowing environmentally destructive mining.

Unfortunately, the demands to release the Water Defenders have not been heeded. At the first court hearing for those detained, requests to set free those arrested while legal proceedings continue were denied.

Staff of The United Church of Canada are in regular communication with ADES as we accompany their efforts to free their colleagues and community members. We continue to advocate for their release with officials. We invite you to hold those detained, their families, and the entire community in prayer at this time. You can follow ADES on Facebook.