↓
Home→Anglican→The Feast of the Confession of Saint Peter 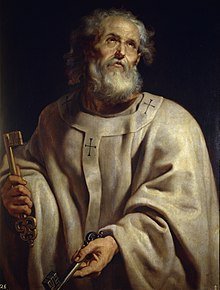 Saint Peter (c. 1610–1612) by Peter Paul Rubens, depicting Peter, vested in the pallium, and holding the Keys of Heaven.

Today we commemorate the confession of Simon Peter as told in the Gospel according to Matthew. When Jesus asked, “Who do you say that I am?” Simon spoke up and said, “You are the Christ, the Son of the living God!” Jesus then responded: “Blessed are you, Simon son of Jonah! It was not flesh and blood that revealed this to you, but my Father in heaven. And I tell you, you are Peter, and on this rock I will build my church.”

In telling this story, the evangelist showed that every confession of Jesus as “the Christ, the Son of the living God,” is always a gift from God. It is not something that human beings can discover by their own powers, nor is it a truth obvious to anyone who looks at the historical Jesus without the help of the Holy Spirit. The natural power of sight needs to be fulfilled by God’s merciful gift of insight.

This feast was instituted to complement the feast of the Conversion of Saint Paul on January twenty-fifth. Together these two feasts provide a suitable beginning and end for the Week of Prayer for Christian Unity. As Paul’s conversion reminds Christians that they are united in a call to proclaim Jesus among the nations, so Peter’s confession reminds Christians that they are united in the basis of this mission, which is the inspired knowledge of Jesus Christ, “the Son of the living God.”

Almighty God,
you inspired Simon Peter, first among the apostles,
to confess Jesus as Messiah and Son of the living God.
Keep your Church steadfast upon the rock of this faith,
so that in unity and peace
we may proclaim the one truth
and follow the one Lord,
who lives and reigns with you and the Holy Spirit,
one God, now and for ever.