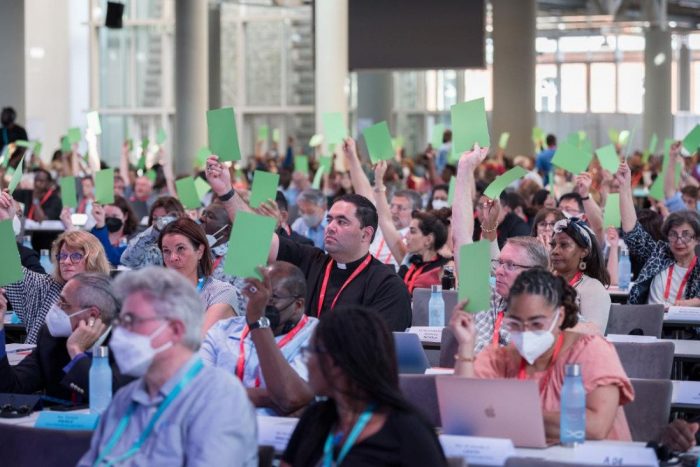 September 6, 2022, Karlsruhe, Germany: Assembly delegates vote to approve a list of new Central Committee members during a business plenary session at the 11th Assembly of the World Council of Churches, held in Karlsruhe, Germany from August 31 to September 8 under the theme “Christ’s Love Moves the World to Reconciliation and Unity.” Photo: Albin Hillert/WCC

The World Council of Churches (WCC) 11th Assembly elected its 150-person central committee during a session at its proceedings in Karlsruhe, Germany on September 6th. The WCC central committee serves as the main decision-making body of the WCC between assemblies.

The nominations committee worked with a pool of names put forward by the WCC’s 352 member churches from more than 120 countries.

A 25-person executive committee, a moderator, and two vice-moderators will be elected by the central committee later this week.

The central committee is elected by the assembly from among its delegates and serves until the next assembly, meeting every two years.

It is responsible for carrying out the policies adopted by the assembly, reviewing and supervising WCC programmes, and managing the WCC budget.

A list of the members arranged by region can be downloaded here.

Members of the Central Committee from our Denominations 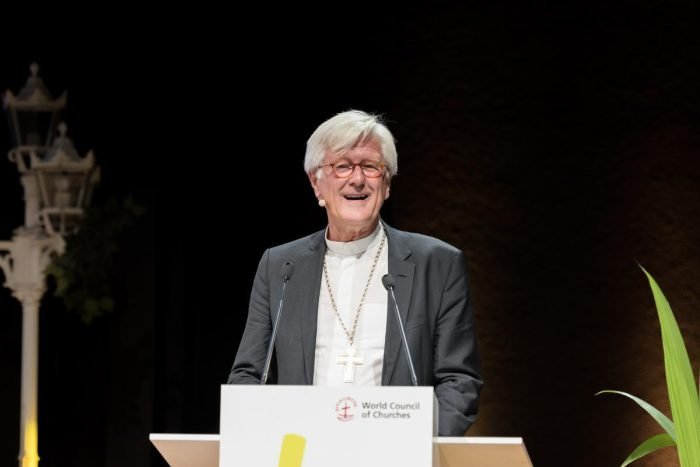 The World Council of Churches (WCC) central committee has elected Bishop Dr. Heinrich Bedford-Strohm of the Evangelical Lutheran Church in Bavaria as its new moderator.

Riley is acting general secretary of the Jamaica Baptist Union and a graduate of the Bossey Ecumenical Institute. Aykazian is known for his ecumenical work for both global and Armenian causes, including the recognition of Armenian genocide, the preservation of Armenian monuments, and statements of solidarity with Armenia and Artsakh.

Bedford-Strohm, as moderator, will serve as the chief governance officer of the WCC, and will have primary responsibility for assuring the coherence of the work of the central committee and of the executive committee, and for assuring that the ethos of consensus characterizes all aspects of the governance of WCC.

Bedford-Strohm expressed how honored he is to have been elected to the position. “The ecumenical movement is my passion,” he said. “It has been my life for a long time.”

He added that the many relationships with people across the world are a big source of joy. “That is my personal reason,” he said. “But I also have a reason for being happy about this election—the reason that is directed toward the future of the church.”

It’s a world that is struck by so many challenges, he said. “Where people are suffering, where people cry out for justice, the church must be an agent to give them a voice and to make visible how the church can be the salt of the earth and the light of the world.”

For information about the roll of these presidents and brief biographies of each, see this post on the World Council of Church’s website.  Rev. Dr Angelique Walker-Smith of the National Baptist Convention USA, Inc., will serve as president for North America.