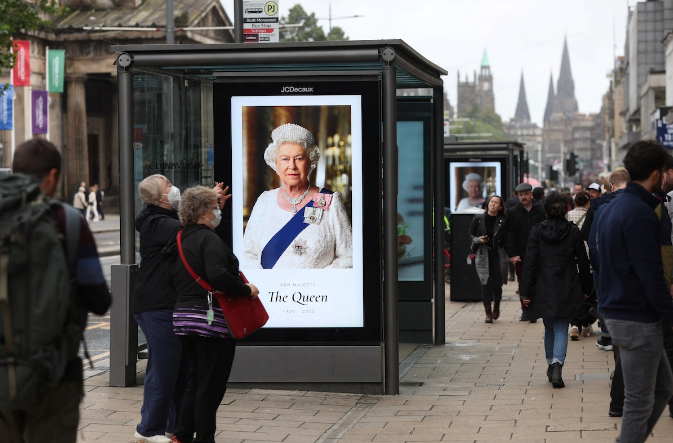 Bus stops in Edinburgh, UK display a portrait of Queen Elizabeth II on September 9, 2022, a day after her death. Photo: Reuters/Lee Smith

~ an article written by Sean Frankling posted on the Anglican Journal website on September 9, 2022 and updated with new information on September 12, 2022

The Anglican Church of Canada will hold its memorial service for Queen Elizabeth II at St. James Cathedral in downtown Toronto on Sept. 20 at 3 p.m., the church’s director of communications, Joe Vecsi, confirmed Sept 12.

The queen’s state funeral will be held at Westminster Abbey, U.K., on Sept 19; the date of a national ceremony in Canada is expected to be announced soon.

The queen of the United Kingdom as well as Canada and other Commonwealth realms died Sept. 8, marking the end of a record-breaking 70-year reign on the throne. The queen was also the supreme governor of the Church of England, formally appointing bishops and archbishops on the advice of the UK prime minister. On Sept. 9, Anglican churches across Canada tolled their bells once per minute 96 times before noon, commemorating each year of Queen Elizabeth II’s life.

“Earlier this year, the Queen celebrated the Jubilee anniversary of her reign as monarch, having served with unstinting faithfulness in her responsibilities since 1952,” Archbishop Linda Nicholls, primate of the Anglican Church of Canada, said in a statement released Sept 8. “She presided through those years with grace and dignity, rooted in her Christian faith and with love for all the people she served.”

Archbishop of Canterbury Justin Welby said he was joining “the nation, the Commonwealth and the world” in mourning Elizabeth. “As we grieve together, we know that, in losing our beloved Queen, we have lost the person whose steadfast loyalty, service and humility has helped us make sense of who we are through decades of extraordinary change in our world, nation and society,” he said in a prepared statement. “As a faithful Christian disciple, and also Supreme Governor of the Church of England, she lived out her faith every day of her life. Her trust in God and profound love for God was foundational in how she led her life—hour by hour, day by day.”

Bishops and other clergy from the dioceses of Toronto, Ottawa, New Westminster, Edmonton and numerous other dioceses across Canada also released statements grieving the queen.

Elizabeth is succeeded by her son, King Charles III. In a Sept. 9 directive, Nicholls announced that all references to the queen in the Book of Common Prayer’s 1962 edition, the Book of Alternative Services and other liturgies used in Anglican Church of Canada services should immediately be replaced by references to the King.

The press release from Nicholls’ office concluded with a prayer:

“O God, from whom comes everything that is upright and true:
Accept our thanks for the gifts of heart and mind thou didst bestow
on thy servant Elizabeth,
And which she showed forth among us in her words and deeds;
Deal graciously we pray thee, with those who mourn,
especially the members of the Royal Family,
that casting every care on thee, they may know the consolation of thy love,
Through Jesus Christ our Lord. Amen.”