‘Apologies are cheap …
unless accompanied by action’:
In Canada for 6 days, Archbishop of Canterbury re-commits to reconciliation 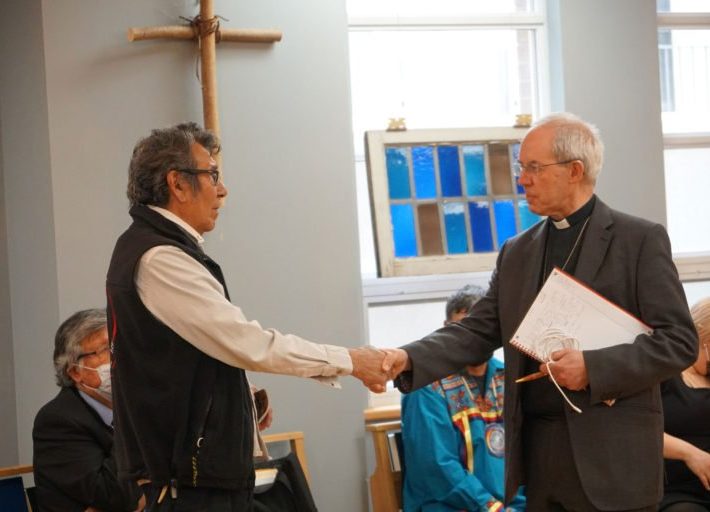 “Will you accept my hand?” Welby asks, reaching out to shake the hand of former Mohawk Institute student Geronimo Henry during his May 3 meeting with Indigenous leaders and residential school survivors in Toronto. Photo: Anglican Video

~ from article by Sean Frankling published by the Anglican Journal on May 6, 2022

When Geronimo Henry stood up to speak at a May 3 meeting between Indigenous community leaders, residential school survivors and Archbishop of Canterbury Justin Welby in Toronto, he told the story of his 11 years in the Mohawk Institute residential school near Brantford, Ont.

He told those gathered how he and other children had been locked in an empty “play room” for hours at a time, gazing out the single window and wishing to see his mother drive up the laneway to bring him home.

He told them about when the city of Brantford built a dump out behind the school and he and the other boys would sneak out to rifle through it for food to supplement the school’s paltry fare.

And he told them that when Stephen Harper’s government issued an official apology for the residential school system in 2008, he used to take a printed copy with him to speaking engagements at universities so that when someone asked what he thought of the apology, he could take it out and rip it up.

“Why did it take the churches and the government so long to bring out this apology? Don’t they know the schools closed in 1970?” asked Henry. “That’s when they should have come and gathered us all up and said they were sorry. But they never.”

Canada’s Indian residential schools began to close in earnest after 1969, when the partnership between the federal government and the churches that had run them dissolved. The Mohawk Institute closed in 1970.

When Welby spoke, he replied, “The Church of England and the Anglican Church of Canada year after year after year had the choice of saying ‘this is not what should happen.’ And I don’t understand why they didn’t.” The church “deliberately colluded, went along with … —[and] invoked the name of God to support—the most terrible evil,” he said.

Welby stressed that there was nothing that would make up for the harm, but repeated a promise he had made at several other stops on his April 28 to May 3 visit to Canada. While his power over the international Anglican Communion was limited, he said, he would do everything in his power to lead the church to advance the cause of reconciliation. That would begin, he said, with carrying what he had heard in hours of testimony from dozens of survivors in Toronto, in James Smith Cree Nation and Prince Albert in Saskatchewan back to this summer’s Lambeth Conference in England, where the rights of Indigenous peoples are a central theme on the agenda.

“Apologies are cheap, if not offensive unless accompanied by action,” said Welby in a similar speech in Prince Albert. “I commit that as much as I am able, I will do that in partnership [with survivors]—not as some distant smart Alec who decides what you need and then does it to you.”

Welby’s tour marks the first time an Archbishop of Canterbury has officially apologized for the Anglican church’s role in the residential school system.

Speaking to the Journal after Welby’s speech, Henry said he would judge the new apology, and decide whether it was better than the 2008 one that he used to tear up, based on whether Welby’s actions lived up to his words.

“I want to see some results first. Words are cheap … That’s what he said about this thing,” he said, opening a small box to reveal a handmade stained-glass paperweight. Welby, he said, had given him the paperweight, inspired by a window in Canterbury Cathedral, promising to make a difference in the years remaining in his term as archbishop. “He said ‘if I don’t do the right thing, if we don’t have reconciliation in four years, you can smash it.’ And I will,” said Henry.

Throughout his visit to Canada, Welby had been careful with the promises he had made, he said at a speech in Prince Albert, because the survivors had heard enough empty promises already. So, while his apology speeches provided few examples of the concrete action he said survivors had a right to expect, he explained that this was a conscious choice. “Because the history is one of over-promising and under-delivering, I want to under-promise and over-deliver.”

One concrete promise Welby did make was to release any records on residential schools in the church’s possession to survivors and to push for the New England Company, the society that originally ran the Mohawk Institute, to do the same.

Welby was originally scheduled to make a stop at the Six Nations of the Grand River, Ont., on his tour of Canada to hear from survivors and offer an apology there also. But the Survivors’ Secretariat, a Six Nations organization representing the survivors of the Mohawk Institute, had asked him not to come unless he was ready to discuss financial support for programs to teach the Indigenous languages that residential schools banned their students from speaking and to help the secretariat get access to the school records. The group hopes these records will help it track down what happened to children who never returned home.

The Mohawk Institute survivors had mixed feelings about having the archbishop visit, said Kimberly Murray, the executive lead for the Survivors’ Secretariat. “There were some survivors who were adamant that they didn’t want the archbishop to come into the [Six Nations] territory at all. Others wanted to meet… so they could speak about what was taken from them as children,” she said.

In the end, the survivors agreed that they were only interested in the meeting if the archbishop was willing to name the church as responsible for perpetrating the harm of the residential schools and to prove his commitment to reconciliation with action. “If he’s not willing to have those conversations, what is the purpose? This isn’t a photo op for the archbishop,” she said. If the Anglican church wanted to reconcile, she added, it was the church, not the survivors, who had to show good will, and these conditions were a way of asserting the survivors’ control over the situation. “They’re taking their voices back.”

In his speech at James Smith Cree Nation, Welby did directly state the Anglican Church’s responsibility for the schools and the abuse committed there, referring to survivors’ testimony as “a window into hell.”

“The difference about that bit of hell is that it was built by the church and in the name of the church,” he said. “For that terrible crime, sin, evil of deliberately, consciously, stupidly—because evil is stupid—building hell and putting children into it and staffing it, I am more sorry than I could ever, ever begin to express. That is, both personally and in my role as archbishop of Canterbury.”

While the administrators committing the abuses at the schools were acting in their capacity as representatives of the Anglican church, Welby stressed that their actions were wildly out of step with the gospel. “What happened there had nothing to do with Christ,” he said.

Dawn Hill is a member of the Survivors Secretariat and survivor of the Mohawk Institute, which she refers to by the nickname “the Mush Hole,” which students gave it for its terrible food. She, too, tells a story about the contrast between Jesus’ teachings and the residential school staff.

“We were living in an environment of uncaring individuals. Often [there was] physical abuse from staff, also sometimes from other kids because no one was watching us,” she said. She and one of her sisters were sent to the school but were allowed very little contact with one another. One afternoon, Hill says she cried herself to sleep on a bench near the school, grieving her separation from her family.

“When I fell asleep, I had the most vivid dream of Jesus. He was standing on top of the building where the dining room is. He looked down at me and told me he would always look after me… I felt this physical wave—it started right down at my feet—of peace, love and goodness. I had the most overwhelming experience I’ve ever had in my life. That was in that environment.”

Hill was in her fifties before she spoke about that experience to her sister, who she says had been sexually assaulted several times by the minister at the Mohawk School. “Her question to me was, ‘Where in the hell was Jesus when I needed him?’”

Like Welby, Hill notes the gap between what people who call themselves Christian preach and the harm they actually do. “I think that is what most people are concerned with today. Not just [in] the Anglican church, even the Catholic Church. You’ve got all this money; what are you actually doing for people? … I don’t figure I need any help now. But I certainly think the restoration of language would be really important.”

After his speech in Toronto, the Journal asked Welby what had made him commit to getting school records for the survivors.

“I think that’s a promise I can probably keep, and I don’t want to promise what I can’t do,” he replied. He said funding for language programs was not for him to promise, as it was within the jurisdiction of the Anglican Church of Canada.