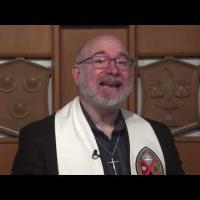 In his Easter video message, Moderator Richard Bott asks:  Who are the messengers of the resurrected Christ today?  What, if anything, is making it hard for us believe them ― and to act on those beliefs?

The following is a transcript of the presentation:

Grace and peace, in Jesus’ name!  I’m Richard Bott, Moderator of The United Church of Canada.

In the gospel according to Luke, the women who went to the tomb to prepare Jesus’ body for its final burial found two things.  First, they found that Jesus’ body wasn’t there; and second, they found divine messengers who demanded of them, “Why are you looking for the living among the dead?” and then told them, “He is not here, but has risen.”

In that moment, the women had a choice.  They chose to believe the messengers and acted according to that belief.

In the gospel according to Luke, the women carried this divine message back to the rest of the disciples.  Mary, from Magdela, Joanna, Mary (who was James’ mother), other women―all who were known by the rest of the disciples.  These trusted members of the community of faith carried a message of God that had been given to them.  And, as the Lukan version of the story tells it, they did share it.

In that moment, the rest of the disciples had a choice.  They could choose to believe the messengers…or not.

How does the scripture put it?  “But these words seemed to them an idle tale, and they did not believe them.”  The rest of the disciples chose not to believe the women who carried the divine message and acted according to that belief.

It took an experience of the risen Christ to change the beliefs of the remaining members of Jesus’ “inner circle” of disciples.  Breaking bread in Emmaus, touching Jesus’ body, and seeing Jesus eat in the upper room ― those kinds of tangible experiences ― they led to a change in belief, and those changed beliefs led to new and changed action.

Most of us will not have the chance that the rest of the disciples did.  So, we need to rely on the messengers.

This Easter, in 2022, I’d like to ask you this:  Who are the messengers of the resurrected Christ today?  Who are the ones who are letting us know of the abundance of God’s love that can change the world in miraculous ways and that we are invited to be an active, living part of that love?  What, if anything, is making it hard for us believe them ― and to act on those beliefs?

As people of deep spirituality, of bold discipleship, of daring justice, are we able to live into the incredible call to life that overcomes death that Christ’s Easter gives?

Peace be with you ― and blessed Easter.

© 2022 The United Church of Canada/L’Église Unie du Canada. Licensed under Creative Commons Attribution Non-commercial Share Alike Licence. To view a copy of this licence, visit http://creativecommons.org/licenses/by-nc-sa/2.5/ca. Any copy must include this notice.