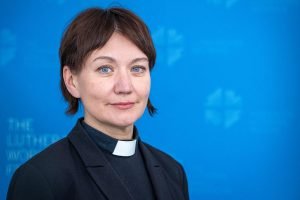 The Lutheran World Federation (LWF) welcomes its new General Secretary, Rev. Anne Burghardt from the Estonian Evangelical Lutheran Church (EELC), who takes up her new role on 1 November, All Saints Day 2021. She is the first woman and the first person from the Central Eastern European region to hold this leadership position.

Burghardt was elected by the LWF Council on 17 June to lead the global communion of 148 member churches. The 45-year-old theologian and pastor was previously working as Head of Development for the EELC’s Institute of Theology in Tallinn, as well as advisor to the church for international and ecumenical relations. She succeeds Rev. Dr Martin Junge who served as LWF General Secretary from 2010 to 2021.

Reflecting on the task ahead of her, Burghardt said: “The life of the LWF is a life of communion, of churches witnessing and working together for justice, peace and dignity for all people. I pray that my work can contribute to the growing together of these churches as they gather around Jesus Christ, the one who unites us all in our mission in the world.”

Read the rest of the article here.

The Rev. Dr. Martin Junge concluded his term of office on October 31st

The following is part of an article posted on October 29, 2021 on the Lutheran World Federation’s website. 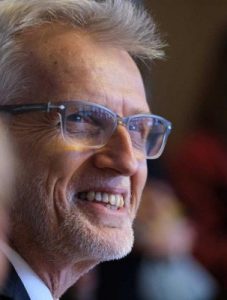 Members of the Lutheran World Federation (LWF) from all parts of the globe gathered online and in person, in the chapel of Geneva’s Ecumenical Center, on 28 October for a service of farewell to General Secretary Rev. Dr Martin Junge, who concludes his term of office at the end of this month.

Addressing Junge during the liturgy Jackelén said: “The LWF called you to be its General Secretary, to lead it in faithful proclamation of the Gospel and in advocacy and service for the neighbor, to guide it on the journey ever-deeper into communion. You have been faithful in your call. You have shared the joys of the communion, you have carried its struggles as the LWF witnesses to God’s mission in the world. On behalf of the LWF Council representing all the member churches, I share our thanks, our deep gratitude for you and your call.”

Ahead of his departure, Junge said it had a privilege and honour to serve the LWF as its General Secretary. “It has been an immensely rich time, and I have been blessed in so many respects, not least by the privilege to be exposed to the life of Lutheran churches all over the world. I cherish unforgettable memories from visits to member churches and continue to give thanks for each of them and for how they contribute in their own ways to witness to the good news of God’s liberating grace in Christ.”

Junge, a former president of the Evangelical Lutheran Church in Chile, was the first Latin American to hold the post of General Secretary of the LWF. He was elected by the LWF Council, taking office on 1 November 2010 and was appointed by the Council for a second term in 2017.