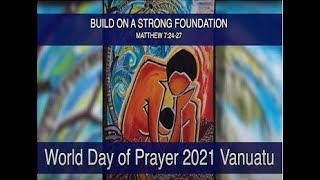 The invitation is out for everyone – men, women, and children of all ages – to join the 2021 World Day of Prayer as we celebrate the theme: Build on a Firm Foundation. Vanuatu, a chain of islands to the east of Australia, has prepared the service this year. We are encouraged to reflect on the challenges this republic has encountered during its steps to independence over the last forty years. The writing team has shared the injustice obstacles that the women of Vanuatu have met, and the hopes they have for the future. These experiences unite us all in prayer and solidarity.

World Day of Prayer is an international, inter-church event that began 99 years ago bridging social, geographic, and political barriers in over 170 countries. The weekend of prayer begins in Samoa and then travels in many languages throughout the world — through Asia, Africa, the Middle East, Europe, Australia, and the Americas. Together we pursue justice, peace, and reconciliation by standing together in prayer and action.

The preparation for the day is vast. An international committee is based in New York and there are national committees and organizations in each participating country. In Canada, the World Day of Prayer (WDP) is coordinated by the Women’s Inter-Church Council of Canada (WICC), one of the original founders of this prayer movement.

Offerings received through the World Day of Prayer transform our prayers into action in the form of project grants empowering women and children in our own country and throughout the world. All regions share in the grants, with consideration given to greatest need. Through WDP offerings, WICC has distributed over 2.5 million dollars in the past 35 years. The vision is to restore hope to women and children touched by injustice.

The Women’s Inter-Church Council of Canada (WICC) invites you, your friends and family to join a service in over 1,100 Canadian communities on or near Friday March 5, 2021.   Many of these will take place via Zoom. As well, individuals and families are welcome to watch a one-hour WDP service video prepared by WICC that features participants from across Canada. This video will be available on the WICC World Day of Prayer page.

~ adapted from a media release by the Kamloops Organizing Committee

The website for the World Day of Prayer International Committee provides much information.  There is information about the artist Juliette Pita, whose painting was chosen to represent this year’s theme as well as explanation of the development of this year’s service by the Vanuatu Writing Committee. 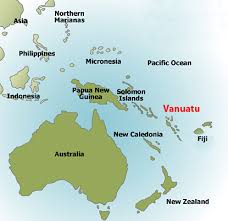 The WICC World Day of Prayer page also included a two page backgrounder about Vanuatu.  A map giving the approximate location of Vanuatu was also available. 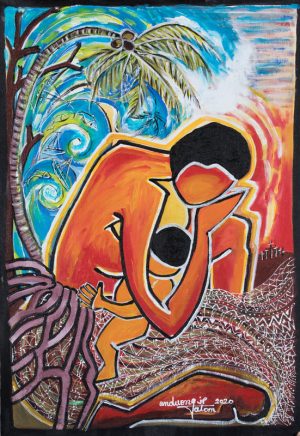