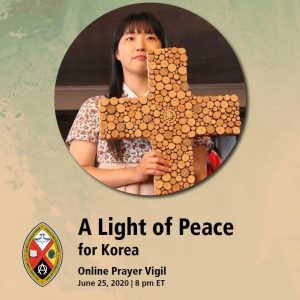 June 25, 2020 marks 70 years since the start of the Korean War in 1950. Halted by an armistice in 1953, the Korean War has never officially ended. Although armed conflict has ceased, tensions remain high and extreme militarization has persisted on both sides of the Peninsula for seven decades. In solidarity with Korean people, we pray for healing, reunification, and an end to war.

This special event links the United Church with the World Council of Churches’ (WCC’s) global prayer campaign A Light of Peace, inspired by United Church partners in Korea. The campaign invites people of faith around the world to pray and act for peace on the Korean Peninsula and for a world free from war and nuclear weapons.

More information can be found here.