↓
Home→Anglican→Relief for Those Impacted by Cyclone Idai

Each of Our Denominations Has a Way to Respond

Note that the Federal Government is Matching Donations Until April 14th 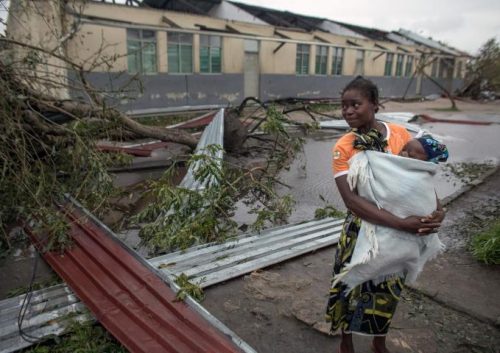 Canadian Lutheran World Relief (CLWR) has joined other leading Canadian organizations in an appeal to support over 2 million people affected by Cyclone Idai in Mozambique, Zimbabwe and Malawi. The powerful storm, which made landfall in Mozambique on March 15, killed at least 750 people and has left hundreds of thousands displaced from their homes.

CLWR is responding to relief efforts through its partnership in the Humanitarian Coalition, a national coalition that will raise funds to support a quick and effective response through ACT Alliance, which includes organizations on the ground in all three affected countries who are well-positioned to deliver immediate response.

As part of the Evangelical Lutheran Church In Canada’s Disaster Response Fund, $5,000 will be forwarded immediately to CLWR to assist with relief efforts.

~ Read more about the Canadian Lutheran World Relief’s response and how to donate.

The purpose of the match is to encourage Canadians to give generously to emergency relief efforts in Mozambique, Malawi and Zimbabwe.

Up to three million people there are in desperate need of humanitarian aid in the aftermath of Cyclone Idai. Hundreds of people have died and survivors have been displaced, creating vulnerable situations for children separated from their families, and women and girls in refugee camps. Severe flooding has damaged water systems leading to a lack of clean water and risk of cholera and other water-borne diseases. Roads, homes schools, and crops have been destroyed.

The Fund will amplify the support of Canadians and reinforce the response of Canada’s Humanitarian Coalition and its members, which include the Canadian Foodgrains Bank. For every dollar donated by individuals to PWRDF’s Cyclone Idai response, between March 15, 2019 and April 14, 2019, the Government of Canada will provide the same to the Humanitarian Coalition, up to a maximum of $2 million.

~ Read more about the Primate’s World Development and Relief Fund’s response and how to donate.

Help provide relief for those affected by Cyclone Idai.  The Government of Canada is now matching donations for Cyclone Idai relief in Mozambique, Malawi, and Zimbabwe.

Cyclone Idai is one of the most deadly cyclones ever recorded in the region.  Up to three million people have been affected and are in desperate need of humanitarian aid.

The United Church of Canada is raising funds as part of the Humanitarian Coalition Cyclone Idai Appeal, through its membership with Canadian Foodgrains Bank.

~ Read more about the Mission and Service Fund’s response and how to donate.

When the Rains Came Down

When the rains come down,
and the winds circle around,
it can be cause for joy,
God of all creation.

But, when the winds are so high,
that they rip roofs off of homes,
and the water pours down in torrents,
there is no joy,
only loss
and death.

We pray for those killed
when Cyclone Idai battered
Mozambique, Malawi & Zimbabwe.
We pray the survivors,
clinging to trees and high places,
away from the high waters,
waiting for rescue.

We pray for those who are doing
all that they can,
with the resources they have,
to save as many as they can,
knowing that they need more,
to help more.

We pray for those grieving,
the deaths of those they love and
the loss of livelihood and home.

May help come, and may it come quickly—
that safety would be found,
and rebuilding would begin.
We pray, loving God,
that we might respond,
with all that we have, and who we are,
out of our security and our abundance,
to be a world that helps,
now,
and in the days to come.

— A prayer in response to Cyclone Idai by the Right Rev. Richard Bott, Moderator of the United Church of Canada