↓
Home→Denominational News→Statement on Attack on Tree of Life Synagogue, Pittsburgh

The United Church is profoundly saddened and outraged
at the attack on the Tree of Life Synagogue. 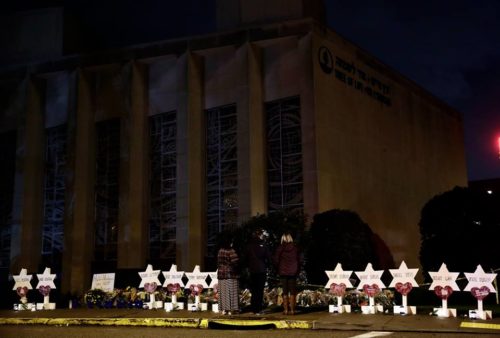 The United Church of Canada is profoundly saddened and outraged at the attack on the Tree of Life Synagogue in Pittsburgh, Pennsylvania. Our deep sympathy and prayers go out to the families and community of those whose loved ones died or were injured in this act of horrific act of violence. Our hearts are with all in the Jewish community who mourn, and are once again experiencing the hateful outcomes of antisemitism.The United Church of Canada denounces such acts of terror perpetrated in the name of religion as well as the rhetoric and worldviews that makes them possible. The suspect, a White nationalist accused of hate crimes, felt empowered to attack innocents and take lives because of their faith. That is not a coincidence in the global atmosphere of division and hate. We will continue to speak and act against all such acts of hatred and discrimination. We are disheartened that violence motivated by fear and hatred continues to claim the lives of so many in our world. An attack on members of one faith community is an attack on the fundamental values of respect for human rights and dignity that are basic to building just and compassionate societies.May the families and friends of those who were killed or injured at the Tree of Life Synagogue find strength in the days ahead as they grieve the unbearable loss of their loved ones or tend to the physical and psychological wounds of those who survived.

In the days ahead, may civic and political leaders rise above calls for retribution and blame and echo the wisdom and grace being demonstrated by so many from communities near and far responding with sympathy, support and solidarity to this attack.

In Bearing Faithful Witness, a statement made in 2003, The United Church of Canada affirmed our common calling with Jews and others to align ourselves with God’s world-mending work, and encouraged all people in our church to be vigilant in resisting antisemitism and anti-Judaism in church and society. We continue to affirm those commitments and to remind our members that we need to cultivate love, understanding, and acceptance of each other, rather than giving in to fears that provide fertile ground for hate and extremism to flourish.

We offer our prayers that together we may build a world where all are treated with dignity and respect. May you be strengthened and blessed as you minister with those so deeply wounded by this attack, and may God’s healing love be with your community in the days ahead.

Oh, God, your children cry out,
and cry out, to you.

May any who have been part of this killing
be found quickly, and held accountable
for what they have done.

Help us, God of all creation,
to challenge the rhetoric that fans the hatred,
especially the interpretations of Christian scripture
that equate “Jewish” and “evil”;
help us, God of all love,
to fight anti-Semitism in all its forms.

We pray to you, The Name,
as disciples of Jesus,
as people filled with your love.

—A prayer for the victims and survivors of the attack on Tree of Life Synagogue, Pittsburgh, by the Right Rev. Richard Bott. Originally posted on Facebook. Moderator Bott encourages the sharing of prayers he posts throughout his term.