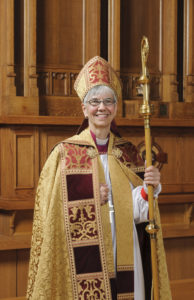 Melissa M. Skelton, Bishop of the Diocese of New Westminster was elected Metropolitan of the Ecclesiastical Province of BC and Yukon on the first ballot at 9:40am, Saturday, May 12, 2018. That office comes with the honorific, “Archbishop”.

The Ecclesiastical Province of BC and Yukon is one of four Provinces that comprise the Anglican Church of Canada and is made up of six dioceses:

Twenty-one of the twenty-four members (which includes the six bishops of the Provincial House of Bishops) of the Provincial Electoral College were present via telephone conference electronic voting to cast their ballots. This vote was historic not only because the first woman was elected Archbishop it was also the first election held entirely by electronic means. Three members of the Provincial House of Bishops: the Right Reverends: Logan McMenamie (BC). Larry Robertson (Yukon) and Melissa Skelton (New Westminster) had previously agreed to stand for election.

Archbishop Melissa Skelton will replace the Right Reverend John Privett, currently Bishop of the Diocese of Kootenay who had resigned as Metropolitan effective April 30, 2018, and will subsequently complete his ministry as diocesan bishop May 31, 2018.

~ excerpts from a post by Randy Murray
to the Diocese of New Westminster website on May 17, 2018
Read the entire article here.