“Standing Under In Order To Understand” 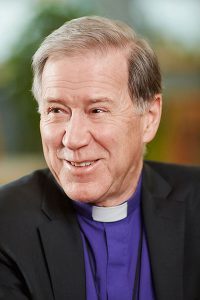 Here is wisdom for devotions in the coming week. It is a gift from Stephen Cottrell, Bishop of Chelmsford. In his chapter “A Good Holy Week” in a book entitled A Good Year, he reminds us that day-by-day the liturgies take us ultimately to Calvary and to the foot of the Cross.  He writes:

“On that first Good Friday, only a few people could do it. Those who promised most were first to flee. But let us be those who stand there today, not understanding but standing under in order to understand. Standing with empty hands and hopeful hearts. For it is only under the cross that we will begin to comprehend its meaning, receive its complicated joys and then help bear it to the world, not carrying it under our arm but shouldering it with Christ for the sake of the world. All this is the uncomfortable and beautiful gift of a good Holy Week.”

I take Cottrell’s wisdom as invitation in considering how those who actually stood at the foot of the Cross were beginning to comprehend the mystery of such wondrous and sacrificial love—love so amazing, so divine. I think of those who may have pondered Jesus’ prayer from the Cross, “Father, forgive them” (Luke 23:34). I think of the penitent thief who turned his face so as to see Jesus and make his plea, “Lord, remember when you come into your kingdom”. (Luke 23:42) I think of the centurion who heard Jesus breathe his last, and then said in a whisper or a shout—we will never know—“Truly this was the Son of God.”  (Mark 15:39) Peter stood some distance from the Cross. Through his tears for having denied he even knew Jesus the night before, he was perhaps beginning to comprehend the true nature of his very own confession at Caesarea Phillipi that Jesus was the Christ, and all the truth that Jesus had spoken with respect to the suffering that would come upon him as The Anointed of God. After the Resurrection, Peter would indeed come to see the Cross as “in accord with the plan and foreknowledge of God”. (Acts 2:23)

Then there is Paul. Once an enemy of the Cross, he would in time speak of it in a deeply personal manner. “May I never boast of anything except the Cross of our Lord Jesus Christ by which the world has been crucified to me and I to the world”. (Ephesians 6:14) He would preach the Cross as “the power of God in Christ” (1 Corinthians 1:18), “to reconcile to himself all things, whether on earth or in heaven” (Colossians 1:19). Paul would write to the Corinthians saying that “in Christ God was reconciling the world to himself” and “entrusting the message of reconciliation to us” (2 Corinthians 5:19).

This reconciliation accomplished in Christ is the essence of the Eucharist. When we have celebrated it within the liturgy then we must embody it in our work in the world.

Sadly, our world is marred by deep divides, rendering it in so many ways to be so remote from the will and word and ways of God. It is afflicted with the evil of racism, the horrors of gender-based violence, and the crime of trafficking men and women and children for multiple forms of labour that exploit their dignity. Our world is angered by deception in the realms of social media. It is torn apart by the frightening rise of extreme nationalism and the tactic of bullying that drive it. Our world is shadowed by lusts for power that trample others, and unbridled greed that leaves so very few so very wealthy, and so very many so very poor. Our world is outraged by the blasphemy of religiously motivated persecution. It is stained with the blood of so many innocent victims of violence. Our world is characterized by a flagrant disregard on the part of so many for any reverence for the earth itself.

With gratitude I am carrying into this Holy Week Cottrell’s image of “standing under in order to understand” the Cross. The experience is drawing out of me every usual expression of a piety that is deeply personal, one that is indeed reflected in the hymns of Holy Week. It is also summoning out of me a piety that is much more worldly, one that is indeed mindful of the harsh realities of our time in history and in the prayers of Holy Week, not the least of which is the Solemn Intercession for Good Friday.

In praying for the Church through Holy Week, I am praying for renewal in its call as Cottrell says, “to shoulder the Cross of Christ, for the sake of the world”.