A Letter in Response to the Colten Boushie Case

On Friday, February 9, 2018, The United Church of Canada posted a response to the good news that Bill C-262, an act to harmonize Canadian law with the UN Declaration on the Rights of Indigenous Peoples, had passed second reading. Optimistically, perhaps naively, we titled it “A Promise of What Canada Can Be.”

I say “naively” because later that day, the reality of what Canada is was made clear when a not-guilty verdict was returned in the second-degree murder trial of Gerald Stanley. Stanley had been charged in the death of Colten Boushie, a 22-year-old man from Red Pheasant First Nation in Treaty 6 (Saskatchewan), who with a group of friends turned up on Stanley’s farm late in the afternoon of August 9, 2016. After a series of events, three gunshots were fired from a pistol handled by Stanley. Colten Boushie, who never left the vehicle he arrived in, was killed by a bullet to the head. Stanley was acquitted on the grounds that the gun accidentally fired a third time after two warning shots.

There has been much discussion in the court, media, and social media of the First Nations young adults’ behaviour on the farm; of Gerald Stanley’s and his son’s response; and of the Stanleys’ conduct after Colten Boushie’s death.

What happened on that farm was preceded and followed by the racism and White privilege that are embedded in Canadian society. Those of us in the dominant culture are reluctant to name this. Similarly, those of us who are White are reluctant to acknowledge and confront our privilege.

Imagine the police conducting an armed search of your home as they tell you that your child has been shot and killed. I can’t.

Imagine that your child has been shot and killed, and that everybody on the jury looks like the shooter. No one looks like you or your child. I can’t.

The church is no stranger to racism and privilege; indeed, those beliefs drove the colonial policies to assimilate Indigenous Peoples that we, with the government, pursued in the running of Indian Residential Schools. Those beliefs persist in prejudices that non-Indigenous peoples may not even recognize they hold. And as the 2016 findings of the Canadian Human Rights Tribunal found, they remain in policies and structures that treat Indigenous peoples in Canada as lesser than others.

When the United Church committed to the Calls to Action of the Truth and Reconciliation Commission of Canada (TRC), we committed to dismantling those beliefs, policies, and structures. We committed to building a new relationship. We did not pick and choose which Calls to Action we would support. Instead, like the Government of Canada, we pledged to support all of them. That includes 18 directed toward the justice system.

As we embrace the principles, norms, and standards of the UN Declaration on the Rights of Indigenous Peoples, we uphold our belief that Indigenous peoples have the right to be free from discrimination. This is entirely fitting with our belief that “racism is a sin and violates God’s desire for humanity” (That All May Be One, 1997).

To the members of the United Church’s 64 Indigenous communities of faith and to Indigenous members of the church in urban areas and other communities of faith, I say that the United Church will continue to seek to build a new relationship between Indigenous and non-Indigenous peoples in Canada. We understand that this cannot be accomplished simply with words. It requires confronting our own racism and dismantling systems of privilege that deny you your rightful place in the life of your nations and this country.

What can we do? We can pray for those affected by this case, and for all those who have been or are being harmed by the systemic racism that underlies it. We can pray for the strength to face hard truths. We can join in public witness and support. We can learn more about what changes the TRC has recommended for the Canadian legal system with respect to Indigenous peoples (Calls to Action 25-42), and we can advocate with political leaders for the fulfillment of those reforms. Most importantly, we can acknowledge and confront our own racism and privilege.

In his Letter from a Birmingham Jail (1963), in which he challenged the White church in the United States to truly stand up to the values, policies, and structures of racism, the Rev. Dr. Martin Luther King Jr. wrote:

Let us all hope that the dark clouds of racial prejudice will soon pass away and the deep fog of misunderstanding will be lifted from our fear-drenched communities, and in some not too distant tomorrow the radiant stars of love and brotherhood will shine over our great nation with all their scintillating beauty.

That is my hope as well. But I know that it is not enough to hope. We will never realize the promise of what Canada can be unless we all work to make it so. 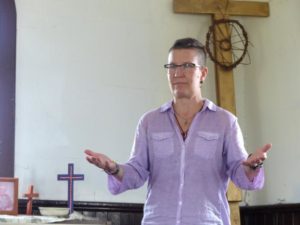