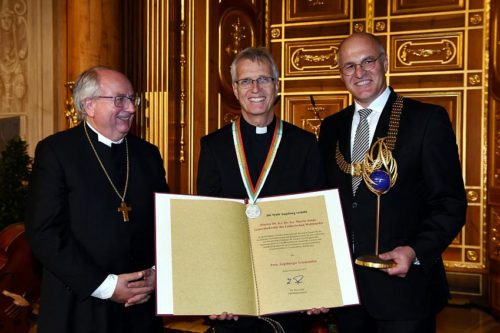 “Dialogue pays off, conflicts can be overcome”

Rev. Dr. Martin Junge, General Secretary of The Lutheran World Foundation (LWF), was today awarded the Augsburg Peace Prize for 2017 in Augsburg, Germany. Speaking at the ceremony in the ceremonial room of the Town Hall, General Secretary Junge underlined the peaceful character of religions and opposed any instrumentalization of faith.

In his tribute, César Carcía, General Secretary of the Mennonite World Conference, praised Junge as someone who “does not keep his distance but actively calls for reconciliation.” He deserved this acknowledgement, Garcia stated, in view of his untiring work for reconciliation among the denominations and on behalf of justice and peace. Dr. Kurt Gribl, lord mayor of Augsburg, presented Martin Junge with the award, a sculpture entitled “Paxible”.

In his response, Junge said: “Religious communities, including Christian ones, must remain alert and recognize when their potential for conflict is being mobilized instead of their fundamental peace-building orientation. I regard it as one of the prime tasks for us religious leaders to take responsibility for ensuring that the negative potential of religions can neither develop nor be instrumentalized politically.”

Signs of peace in a polarized world

The LWF General Secretary pointed out that, with the 1555 treaty known as the Peace of Augsburg, the City of Augsburg stands for the efforts to make peace between Catholics and Lutherans. At the same time, he added, the date reminds us of the wars of religion and Christianity’s potential for violence. The joint Catholic-Lutheran commemoration on 31 October 2016 in Lund had sent a clear signal “that dialogue pays off, that conflict can be overcome.”  Churches should also oppose current social developments with this message, he underlined. “A mindset of withdrawal can be observed that endangers communities, including communities of states, and even threatens them with division”.

“Worship and world service belong together”

The Chilean theologian issued an appeal not to regard the church as an end in itself: “Worship and service to the world belong together,” Junge stated. The Lutheran World Federation is also one of the biggest Protestant organizations for emergency relief and development assistance. With respect to the worldwide refugee movements, he recalled that caring for the suffering neighbor is an inalienable part of Christian identity. “Those who claim that Europe must close its borders to preserve its Christian identity do not understand the meaning of Christian faith at all.”

César García remarked on extraordinary fact that he, a Mennonite, could now make this speech of tribute: “Centuries ago it would have been inconceivable for an Anabaptist-Mennonite leader to speak in honor of a Lutheran leader in this city. The years of religious violence, of martyrdom and persecution are over – through the miracle of reconciliation in which Martin Junge played a major role.” He was referring to an event at the Eleventh LWF Assembly in 2010 in Stuttgart, Germany. In a historic plea for reconciliation, the LWF asked the Mennonites for forgiveness in view of the persecutions their forbears had suffered for their beliefs. Soon afterwards, the LWF, the Mennonites and the Catholic Church began a still ongoing trilateral dialogue on the understanding of baptism.

The Augsburg Peace Festival has been celebrated every year since 1650 on 8 August. And every three years since 1985 the Augsburg Peace Prize “for special achievements promoting areas of interconfessional agreement” has been jointly awarded by the City of Augsburg and the Evangelical Lutheran Church in Bavaria. The jury is chaired by Regional Bishop Michael Grabow. Former prize-winners include Mikhail Gorbachev, Pope Shenouda III of Alexandria and Richard von Weizsäcker. The prize is endowed with €12,500. Before the award ceremony, the LWF General Secretary participated in an ecumenical service in Augsburg’s St. Anne’s Church. There he joined the head of the Ecumenical Department of the Bavarian Church, OKR Michael Martin, in a dialogue sermon.