By Matt Gardner on November 9, 2016 on the Anglican Church of Canada’s website

The need for renewed dialogue between the Anglican Church of Canada and The United Church of Canada was widely recognized among members of both churches following the failure of the Plan of Union in 1975. In its first phase from 2003 to 2009, the Anglican-United Church dialogue focused on ecumenical shared ministries, other areas of ministry such as chaplaincy, and common work in groups such as KAIROS, ultimately presenting its findings in the St. Brigid Report.

Following a renewed mandate in 2012, a second phase of the dialogue began—this time concerned specifically with the theological and ecclesial understandings of creeds, sacraments, and orders of ministry within the two churches. 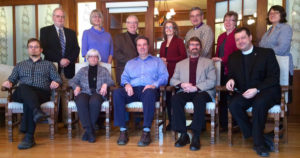 Now, members of the dialogue have presented the fruits of their second phase of discussion from 2012 to 2016 in a new report. Available free online, Called to Unity in Mission compares views and approaches of each church to spur further discussion and presents opportunities for shared engagement in ministry and mission.