↓
Home→Anglican→News from the Primates’ Meeting in Canterbury

An Initial Statement from the Primate, the Most Rev. Fred Hiltz 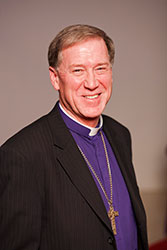 Having met this week in Canterbury, England, the Primates of the Anglican Communion committed – even in the face of deep differences of theological conviction concerning same sex marriage – to walk together and not apart. Our conversations reflected the truth that, while the Anglican Communion is a family of autonomous Churches in communion with the see of Canterbury, we live by the long-held principle of ‘mutual responsibility and inter dependence in the Body of Christ’. While our relationships are most often characterized by mutual support and encouragement, there are times when we experience stress and strain and we know our need for the grace of God to be patient with each other. Such was the experience of the primates this week.

We struggled with the fragility of our relations in response to the actions taken by the General Convention of The Episcopal Church in changing its canon on marriage, making provision for the blessing of same sex marriages. We talked, prayed and wrestled with the consequences considered by the meeting. Some of us wept.

Through this whole conversation I was deeply mindful that our Church will deal with the first reading of a proposed change of a similar kind in our canon on marriage at General Synod in July 2016. There is no doubt in my mind that the action of the Primates’ meeting will weigh into our deliberations. On this matter I shall not comment further just now, as I intend to write some reflections for release on Monday January 18, 2016. They will speak not only to the issue of same sex marriage, but also the host of other critical global issues discussed in our meeting.

For now I ask for your prayers for all of the primates as they make their way home. I know some are returning to very challenging situations beset with extreme poverty, civil war, religiously motivated violence and the devastating effects of climate change.

This week reminded me once again of the servant style of leadership required of the primates of the Churches of The Anglican Communion. As Jean Vanier reminded us in his reflections at our closing Eucharist, we are called to be the face of Jesus in this world. Pray with me that all of us be faithful in this calling.