On Thursday, September 24, 2015, members of the Church of St Paul, Clearwater United Church, and the local community as well as representatives from the Anglican Parishes of the Central Interior, BC Synod of the Evangelical Lutheran Church in Canada, and Kamloops-Okanagan Presbytery of the United Church of Canada gathered for worship and to sign the Ecumenical Shared Ministry Agreement.  This service was the culmination of almost two years of work.  Research, meetings, writing drafts, getting approvals, editing, proofreading, and setting a date led to a momentous day.

Actually, the journey to becoming an ecumenical shared ministry began many years earlier.  Seeds were planted, but germination and growth really began when the Rev. Keith Petersen retired from full-time ministry and approached the Rev. Ivy Thomas, the minister at Barriere United Church, to see if a relationship could develop with the Lutherans living in the Barriere area.  In 2010, the Church of the Redeemer and Barriere United Church congregations and those connected to ELCIC formed the Church of St Paul. 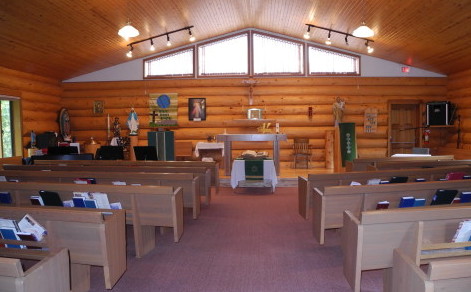 The sanctuary at the Catholic Church of St. James, Clearwater has been prepared.

The Thanksgiving for Baptism which began the service represented our region as waters from the Clearwater River, the Barriere River, and the North Thompson River were poured into the font.  Bishop Barbara Andrews preached. 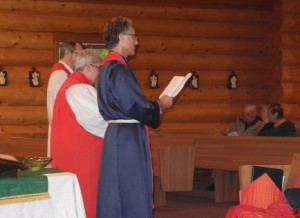 The Rev. Ken Jones, Chairperson of Kamloops-Okanagan Presbytery of the United Church of Canada, asking the affirmation question of those from the Lutheran Church tradition.

Prior to the signing of the Ecumenical Shared Ministry Agreement, the following affirmations were made.

Will you commit yourselves to supporting and participating in the mission and ministry of Trinity Shared Ministry and the North Thompson Ecumenical Shared Ministry?

The response was “We will, with God’s help.”

Then, the representatives took their turn at signing copies of the Ecumenical Shared Ministry Agreement: 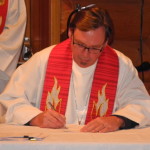 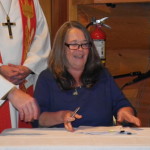 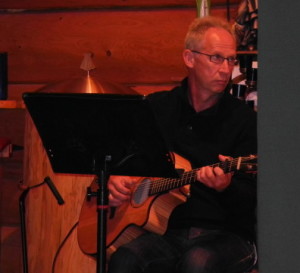 Jerry playing some background music while the Agreement is being signed.

As Bishop Barbara took her place at the table to sign the Agreement and the other judicatory representatives gathered around her, she commented that she felt that she was at a wedding.  Applause broke out once the final signature was written.  The signed agreement declared that

The service concluded with communion and the hymn, Sent Forth by God’s Blessing.

Following the service, we moved downstairs to the Activity Room and celebrated with a feast of lasagna, breads, salads, and fruit crisps. 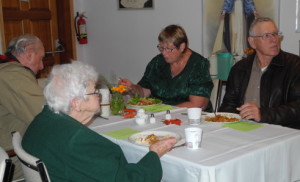 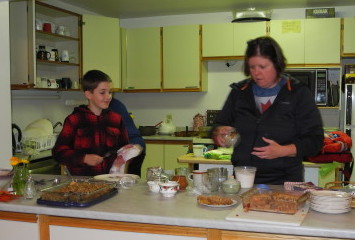