Nepal Earthquake the Most Powerful in 81 Years 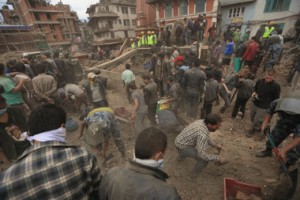 The United Church is welcoming donations for Nepal Earthquake Relief in response to the 7.8 magnitude earthquake that hit the south Asian country on April 24. The United Church has contributed $15,000 from its Emergency Response Fund to ACT Alliance to provide emergency aid in Kathmandu and surrounding areas. The Canadian government will match, dollar for dollar, donations to registered Canadian charities (including the United Church) made between April 25 and May 25. (See below for more information on matching funds.)

The earthquake has been called the most powerful quake to hit the region in 81 years. Over 6,200 people have been killed (with the death toll likely to rise), and many thousands more injured, mostly from collapsed buildings. Damage to property is extensive. The government of Nepal has declared a state of emergency and many nations, including nearby India and Pakistan, have mobilized quickly to provide generous amounts of emergency aid and other support.

United Church partner, the Christian Conference of Asia (CCA), expressed appreciation for the rapid response of several governments and aid agencies in rescue and relief operations. General Secretary-Elect Dr. Mathews George Chunakara made a special appeal to the global church: “We urge the ecumenical family to extend every possible support for humanitarian aid assistance in Nepal and other affected areas.”

Patti Talbot, the United Church’s Program Coordinator for Asia Partnerships, noted with concern the unfolding scale of this disaster: “Our response will support people and communities affected in the Kathmandu Valley, as well as in smaller and more remote towns and villages.”

ACT Alliance members on the ground in Nepal are working with government institutions, UN agencies, and non-governmental aid agencies to treat the injured and provide emergency relief. ACT is expected to issue an appeal for Nepal in the coming days once assessments have been completed to determine the kind of aid needed (likely mostly medium to long term) and how ACT and its members might best respond.

To donate:
You may contribute through your church offerings by indicating an amount on your envelope for Nepal Relief Efforts or follow the instructions on the United Church’s website.