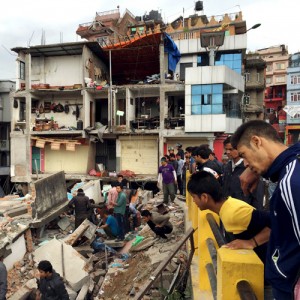 People survey a site damaged by an earthquake, in Kathmandu, Nepal, April 25, 2015. The shallow earthquake measuring 7.9 magnitude struck west of the ancient Nepali capital of Kathmandu on Saturday, killing more than 100 people, injuring hundreds and leaving a pall over the valley, doctors and witnesses said. REUTERS/Navesh Chitrakar TPX IMAGES OF THE DAY – RTX1A7JW

LWF staff members distributed tarpaulins, hygiene kits and ready-made food to about 400 families in Kathmandu over the weekend of the earthquake, despite being displaced from their homes themselves. Along with assessing the situation in remote communities, LWF priorities are now to provide water, sanitation and hygiene materials, as well as emergency shelter to people who lost their homes or who are staying outside for fear of aftershocks.

“We have been personally involved in rescuing neighbors. There was a five-storey building which collapsed. There were eight people in it. We pulled out two people. Others managed to get out on their own,” says Laxman Niroula, an information and technology officer for LWF.

On April 28, over 4,400 people were confirmed dead after a 7.9 magnitude earthquake struck Nepal on April 25, leaving massive destruction in its wake. Many thousands more have been left homeless and in need of urgent relief.

“Our support and prayers are with the people of Nepal as they cope with the devastation caused by this disaster,” says Robert Granke, CLWR Executive Director. “We are grateful for our partners at Lutheran World Federation Nepal, whose experience and preparedness have made them extremely well placed to provide urgently needed aid on the ground.”

LWF has decades of experience with development and relief work in Nepal, having established its office there in 1984. LWF’s Nepal-based Emergency Response Hub allows a quick and substantial response to the needs of disaster-affected people in the region. LWF is currently working with the Nepalese government, the United Nations system and church partners in the ACT Alliance network to further coordinate their response.

To donate, you may